By Nana Nadal Food No Comments 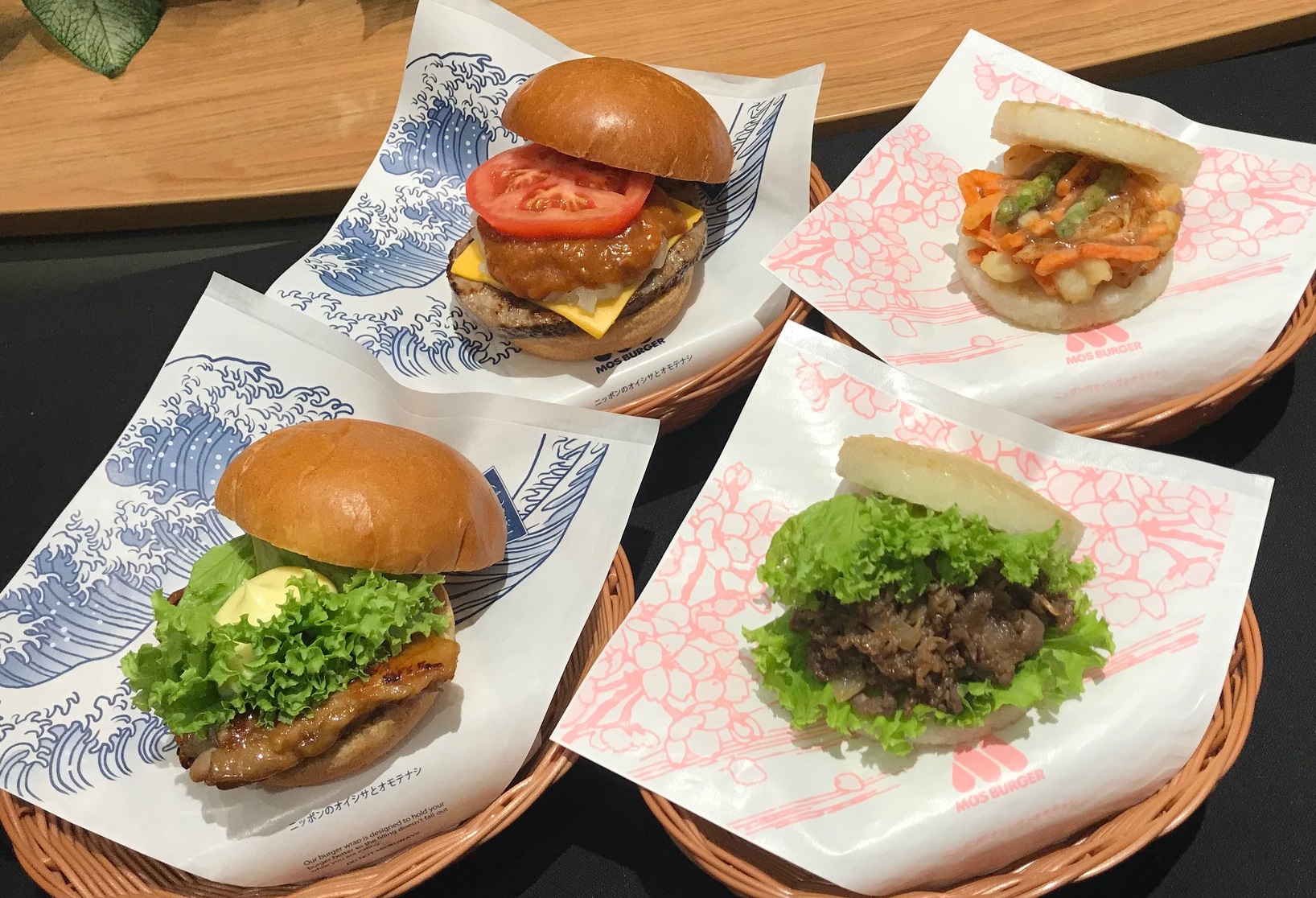 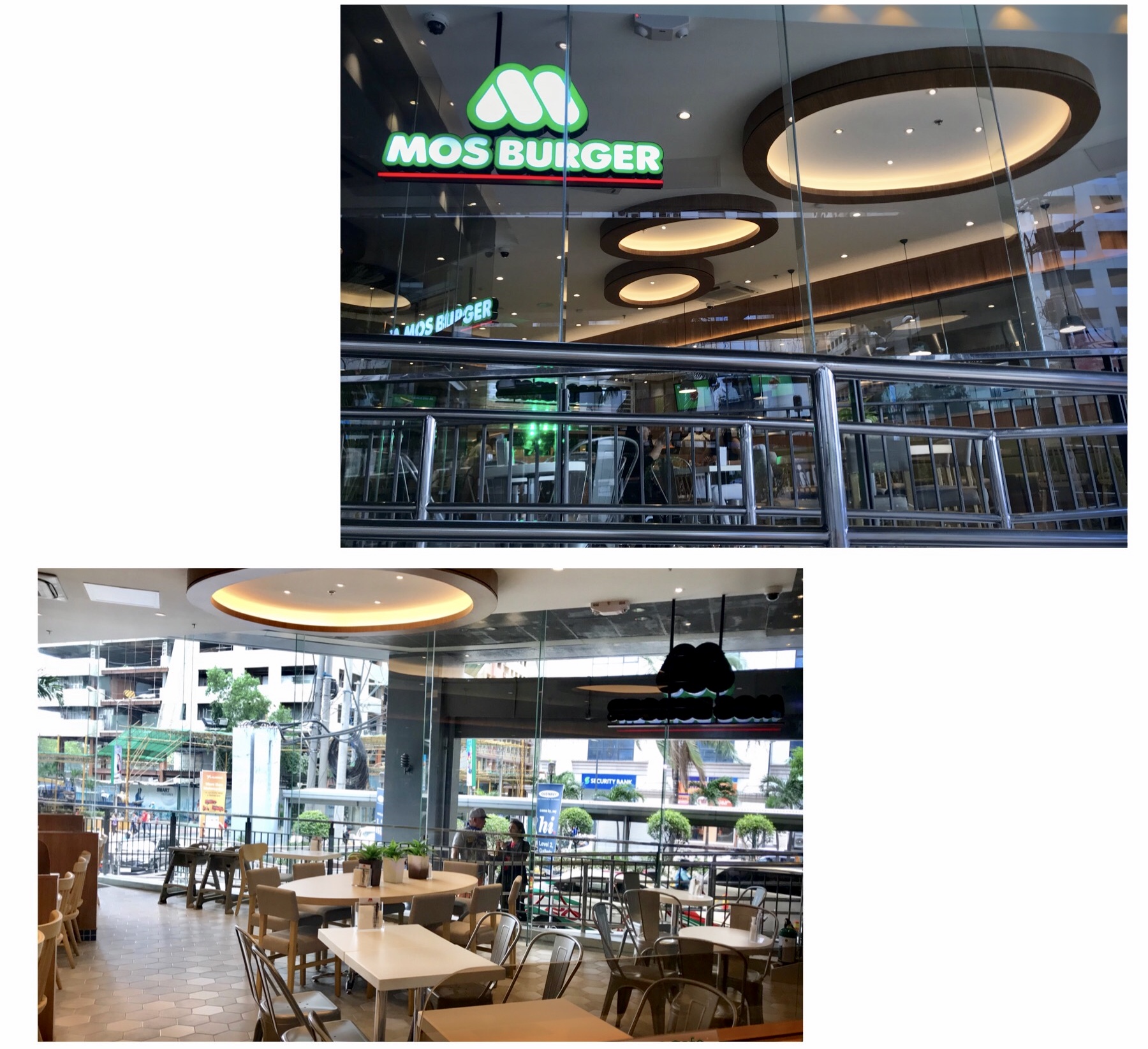 MOS Burger Robinson’s Galleria is right at the ADB Avenue entrance of the mall. The restaurant is visible from the street. 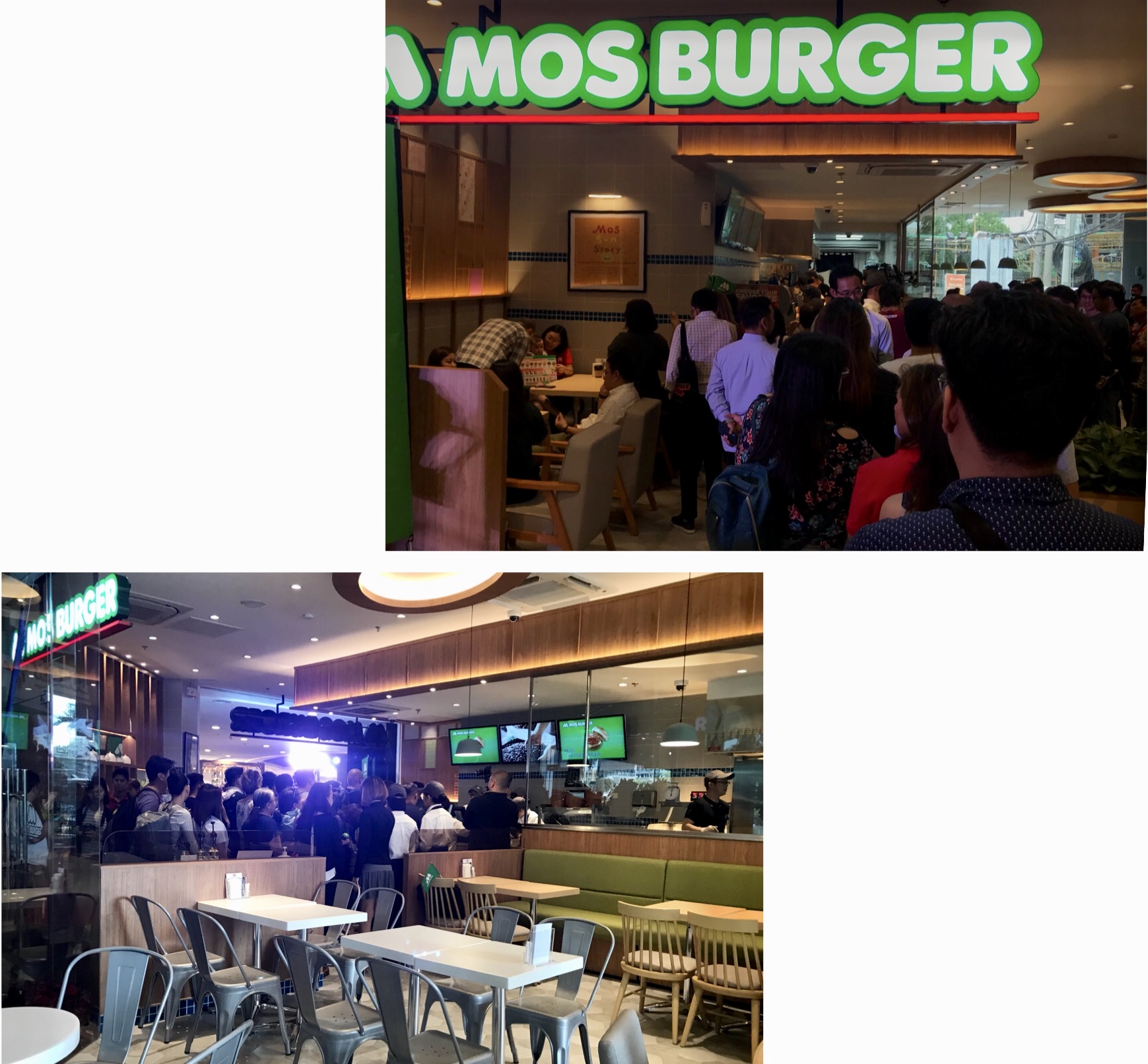 I was among those eager to try MOS Burger’s offerings. Luckily, I got in easy because our radio show, Gear Box, was invited by Eggshell Worldwide Communications (thank you, Charmaine, Loren, and Lyka!).

I vaguely recall having been to MOS Burger in one of my travels abroad. I faintly remember it being at a food court of a mall but couldn’t pinpoint exactly where. I dug up my old photos and found the shots in my Taiwan files. Obviously, the meal did not leave much impression. Maybe I ordered the wrong item. 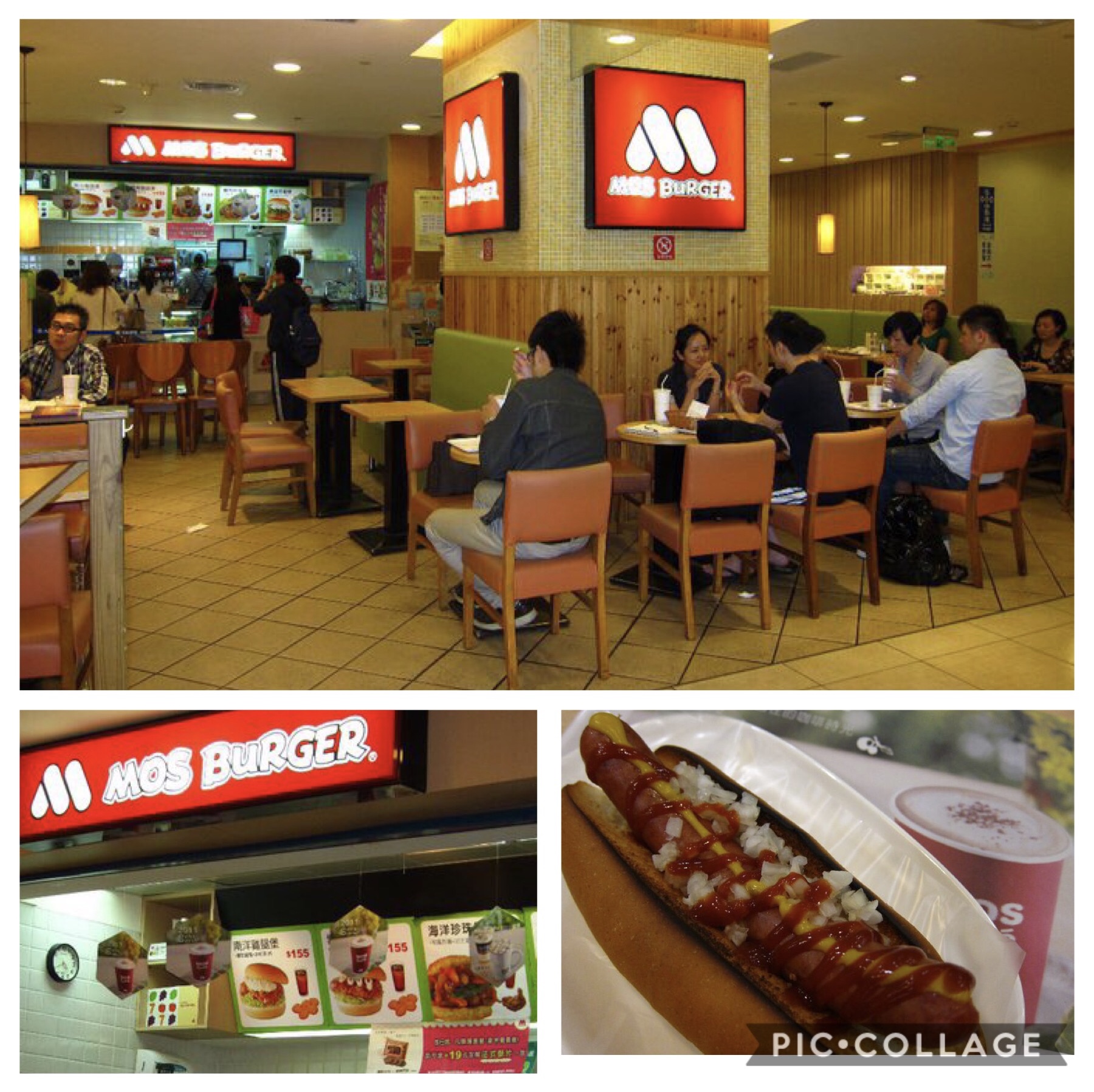 This photo is from my 2011 visit to Taiwan. I had a hotdog sandwich from MOS Burger. Unfortunately, I cannot remember the experience. It must have been neither exceptionally good nor bad.

This time, however, I was quite happy with my experience. Since the newly-opened branch was packed, I had my order to go. I knew I won’t be able to get my sandwiches immediately after paying because during my conversation with MOS Burger Philippines CEO, Hubert Young, he mentioned that at MOS Burger, it’s cook-to-order. “It’s not a fast food restaurant where in you walk in, you pay, and it’s there. It will take awhile for us because we need to cook your order, so it’s a fast casual restaurant,” he clarified. 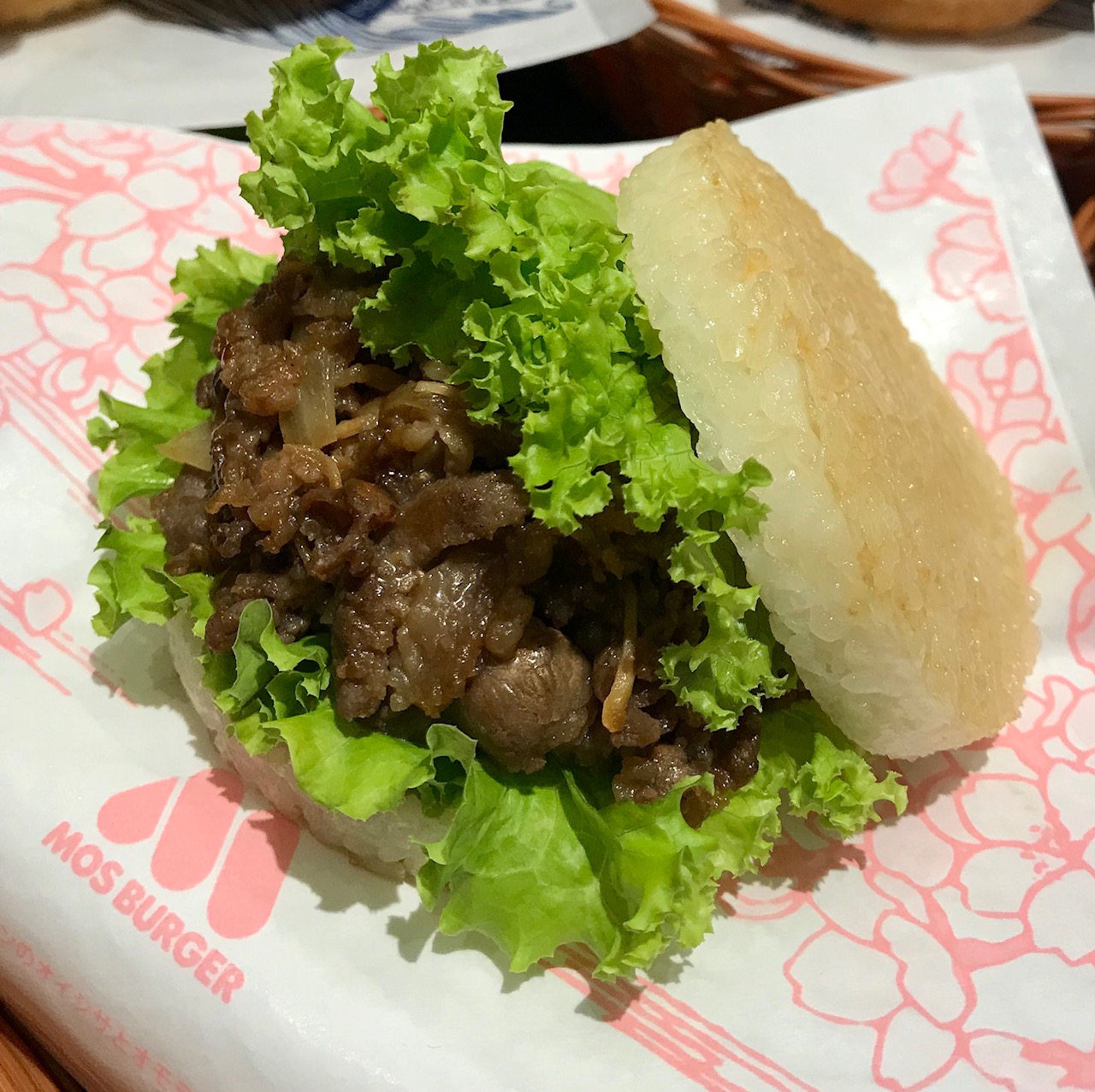 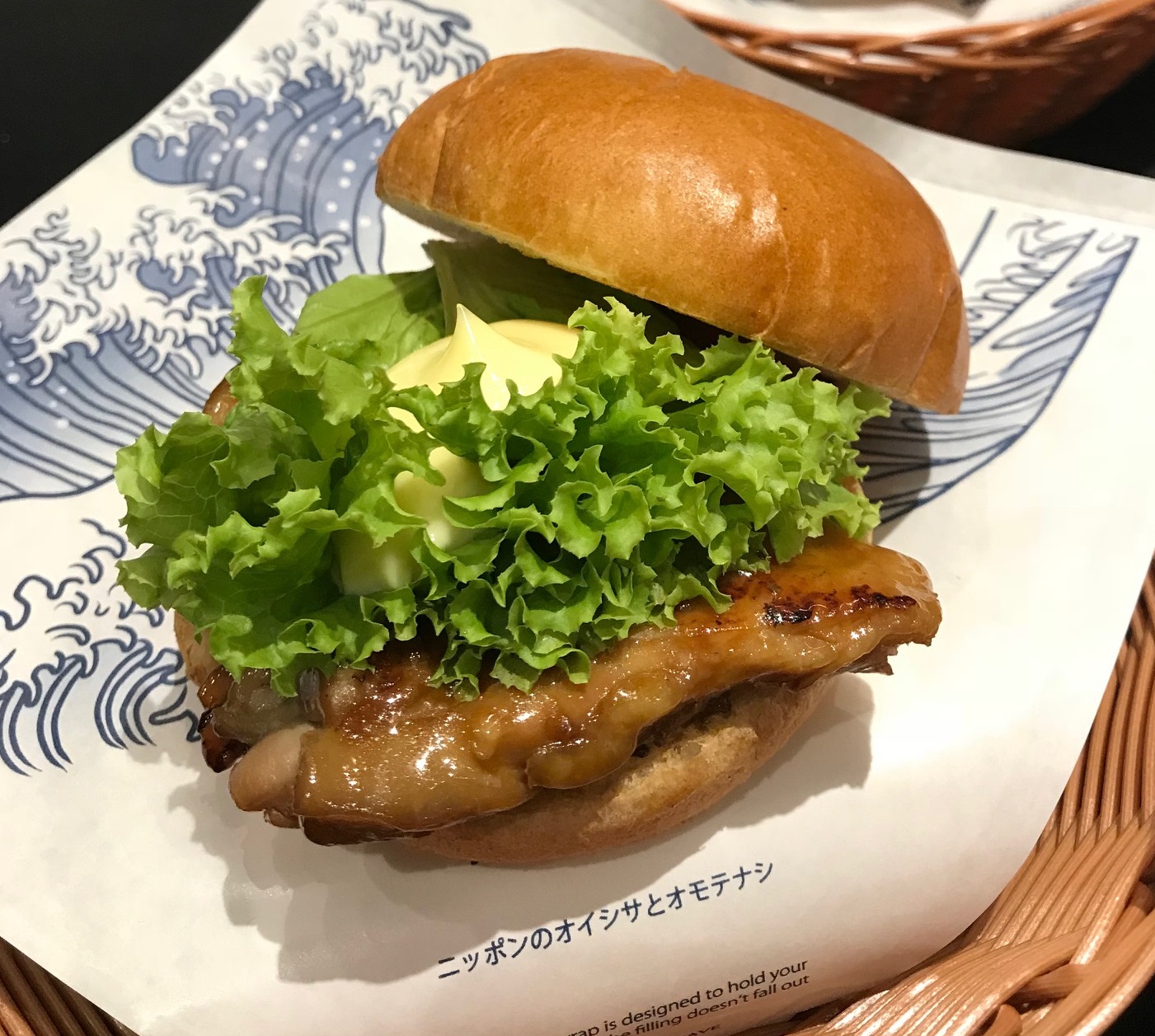 I waited 10 minutes for my bag of Yakiniku Rice Burger, Teriyaki Chicken Rice Burger, and MOS Cheeseburger. Not bad, considering the demand and that’s it’s their first day. I overheard one customer order one of each item on the menu. Whoa! No room for the typical “we’re on soft opening” excuse here.

The rice burgers are like no other. The fillings are generous and very flavorful that I was wondering if I could order extra “rice”. They’re very convenient to eat, specially with the style of packaging used. So even if you’re in a rush and don’t have time to sit down for a serious meal, you won’t have to skip your rice. Should be a smash hit among rice-loving Pinoys who are forever stuck in horrendous traffic. 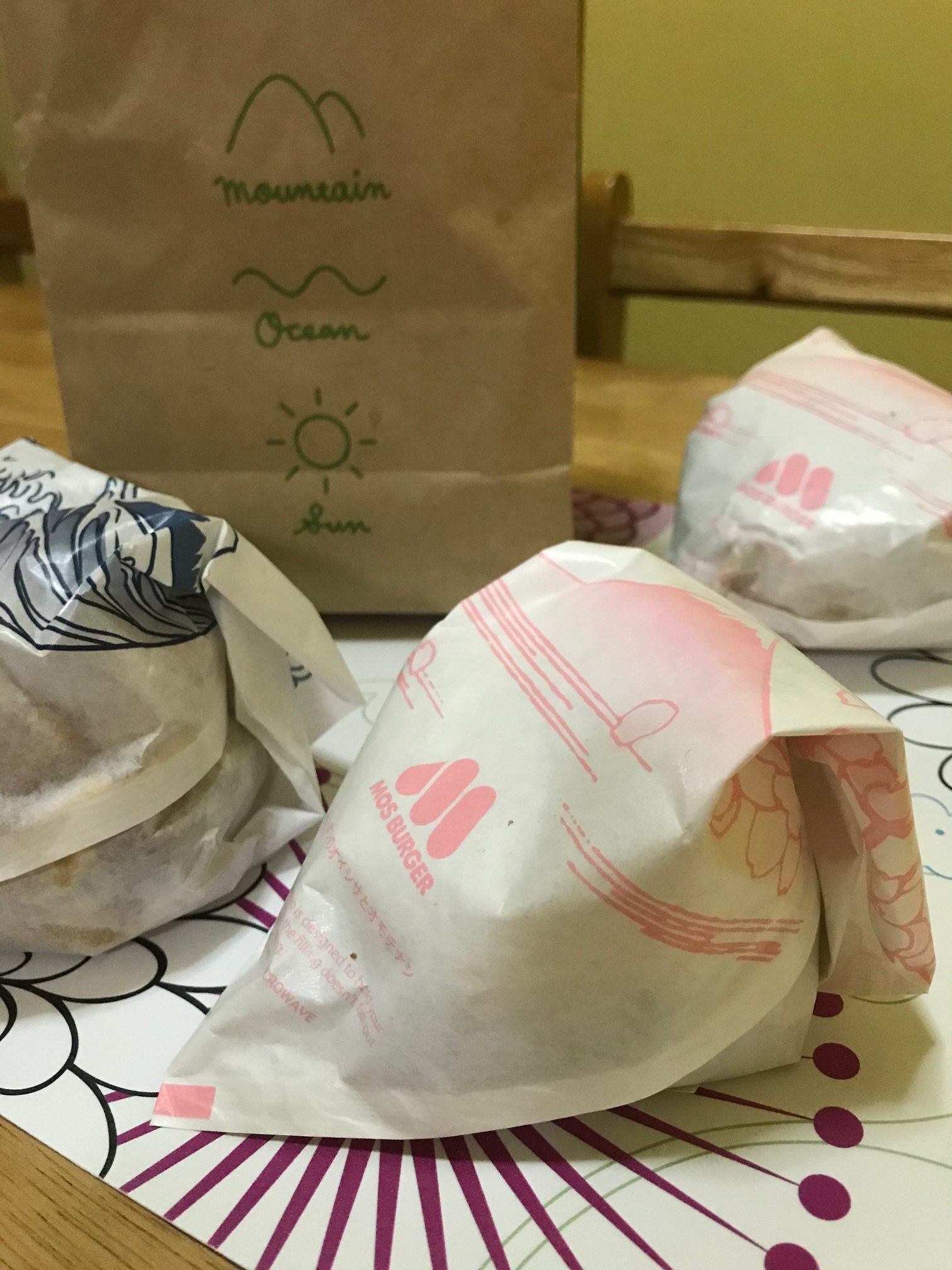 I appreciate how the burger wrap is sealed underneath. 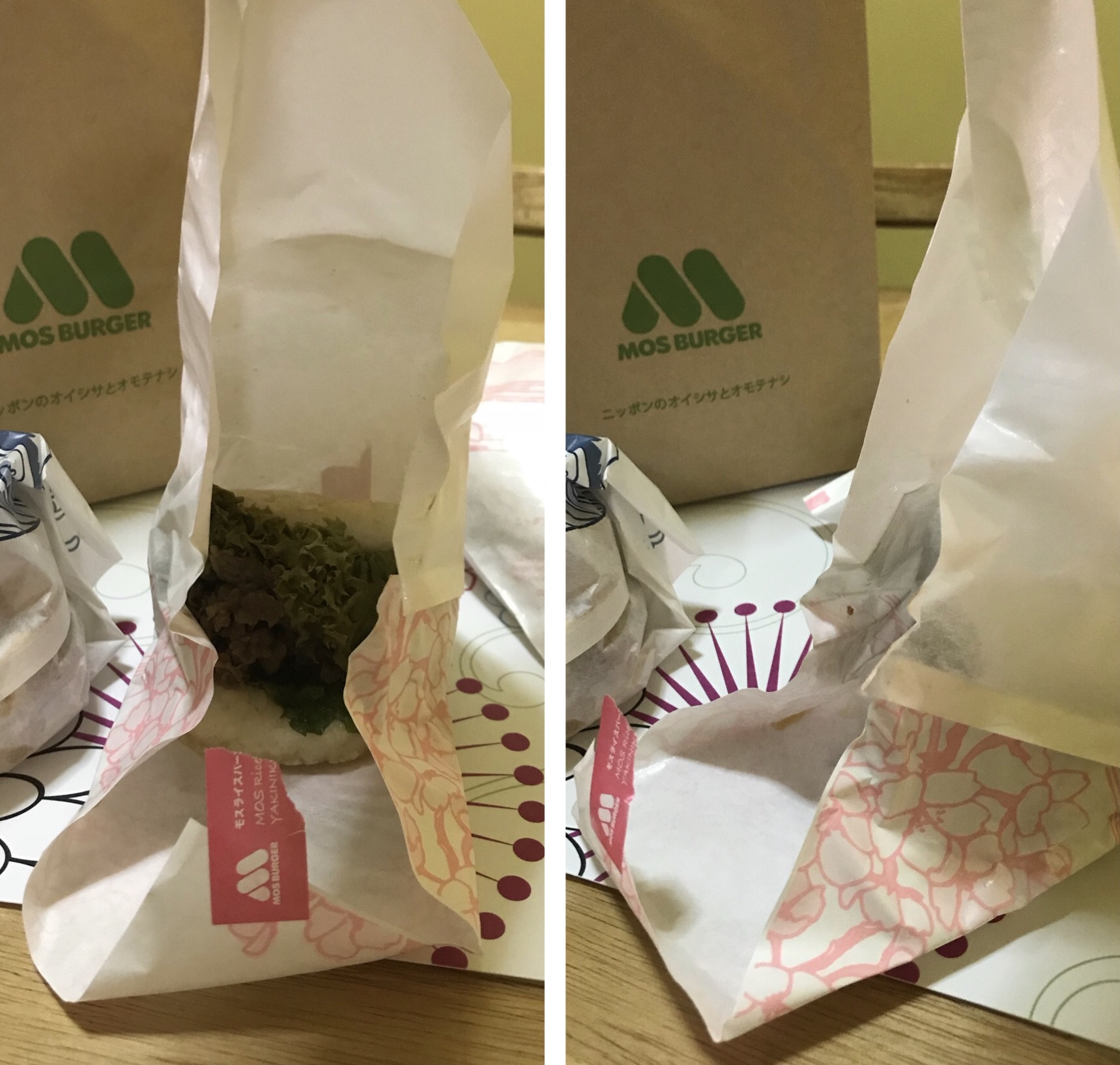 The wrap opens like an envelope/pouch. Less chances of making a mess!

What I can’t wait to have again is the MOS Cheeseburger. I think it’s their special sauce that makes all the difference. It’s really tasty! Loved the texture of the bread and the patty too. To think I consumed it several hours after purchase – from the ref, after a few minutes in the microwave. It’s my MOS favorite. So far, that is. 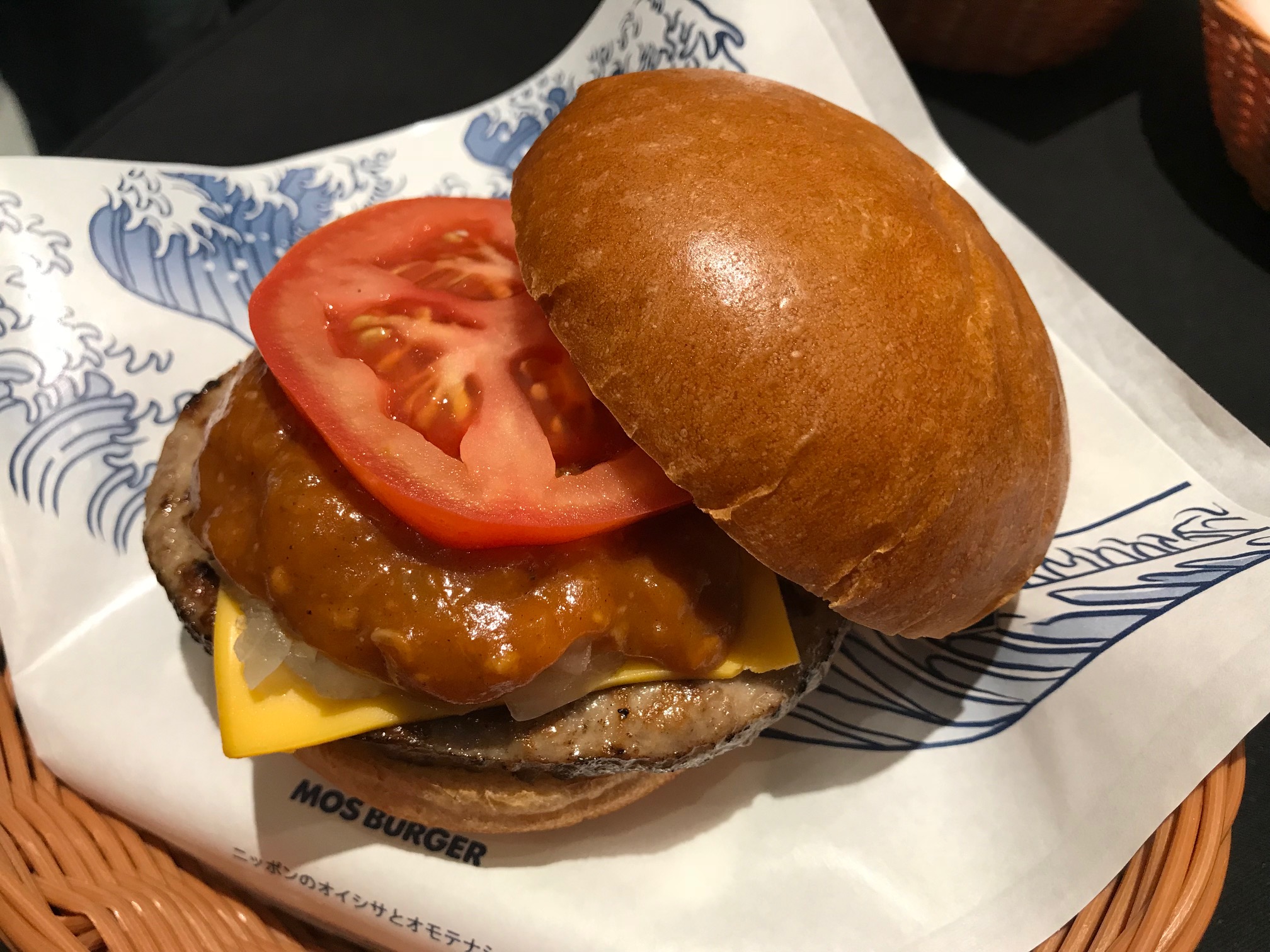 According to Mr. Young, everything that’s available in Japan’s menu is currently available here except for one or two items, “we will eventually launch them, we don’t want to overwhelm everybody.” Mr. Young also shared that MOS Burger Philippines has been given the go signal to come up with localized products. These should be ready in a couple of months. I wonder what they’ll be. A rice burger version of our breakfast “silogs”, maybe? Or fried chicken? All the restos under their category offer fried chicken meals. 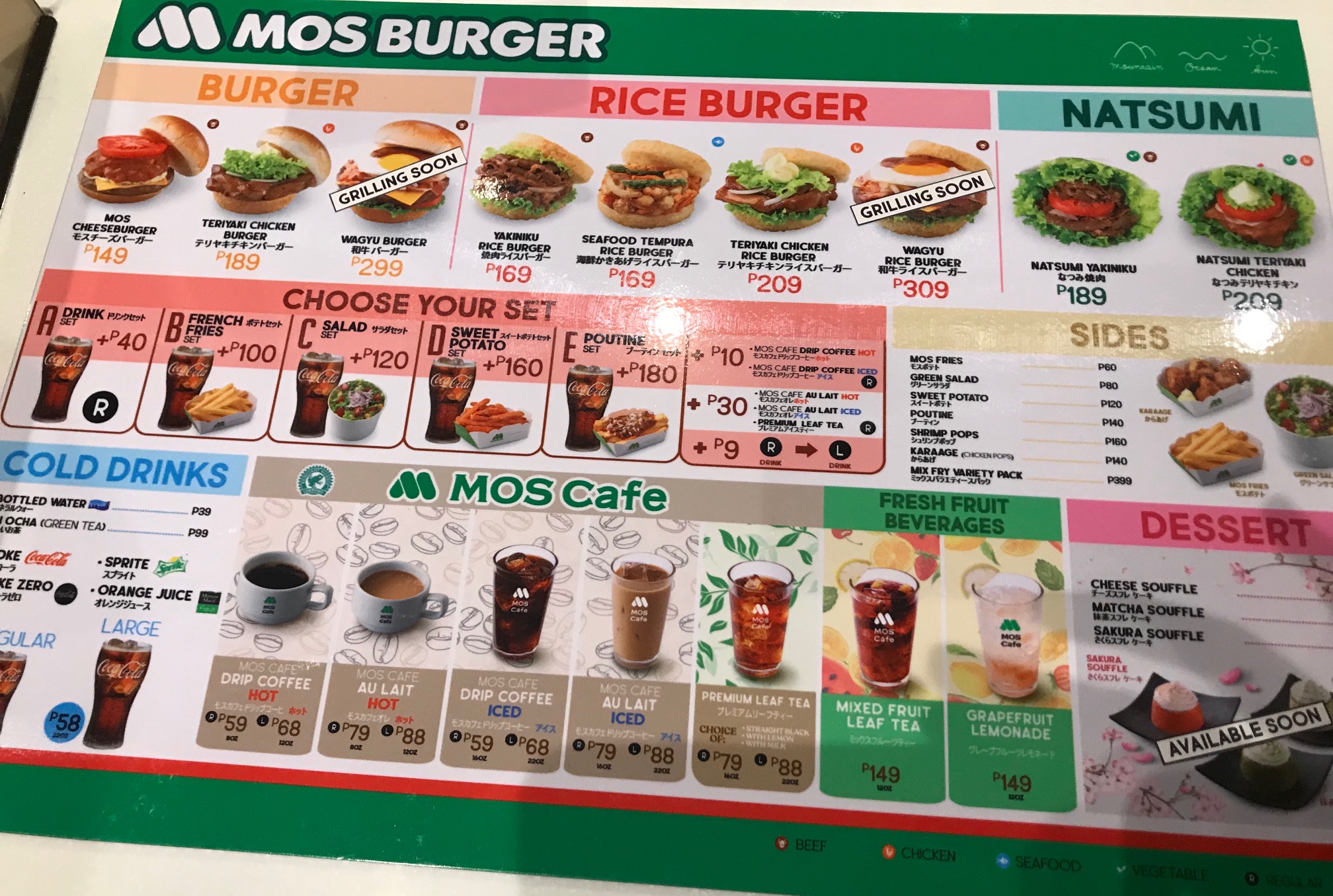 Speaking of, I asked Mr. Young if he’s not afraid of going up against the big chains. “They’re big. They can swallow us, probably. But we’ll have our own market,” he shrugged. His confidence must be from the support he is receiving from MOS Burger headquarters. The chairman himself (who inherited the business from the founder, his uncle), Atsushi Sakurada flew in for the launch of the Robinsons Galleria outlet. With him were Jun Takifuka, Hironobu Maehara, and Eiichi Isozaki of MOS Food Services. 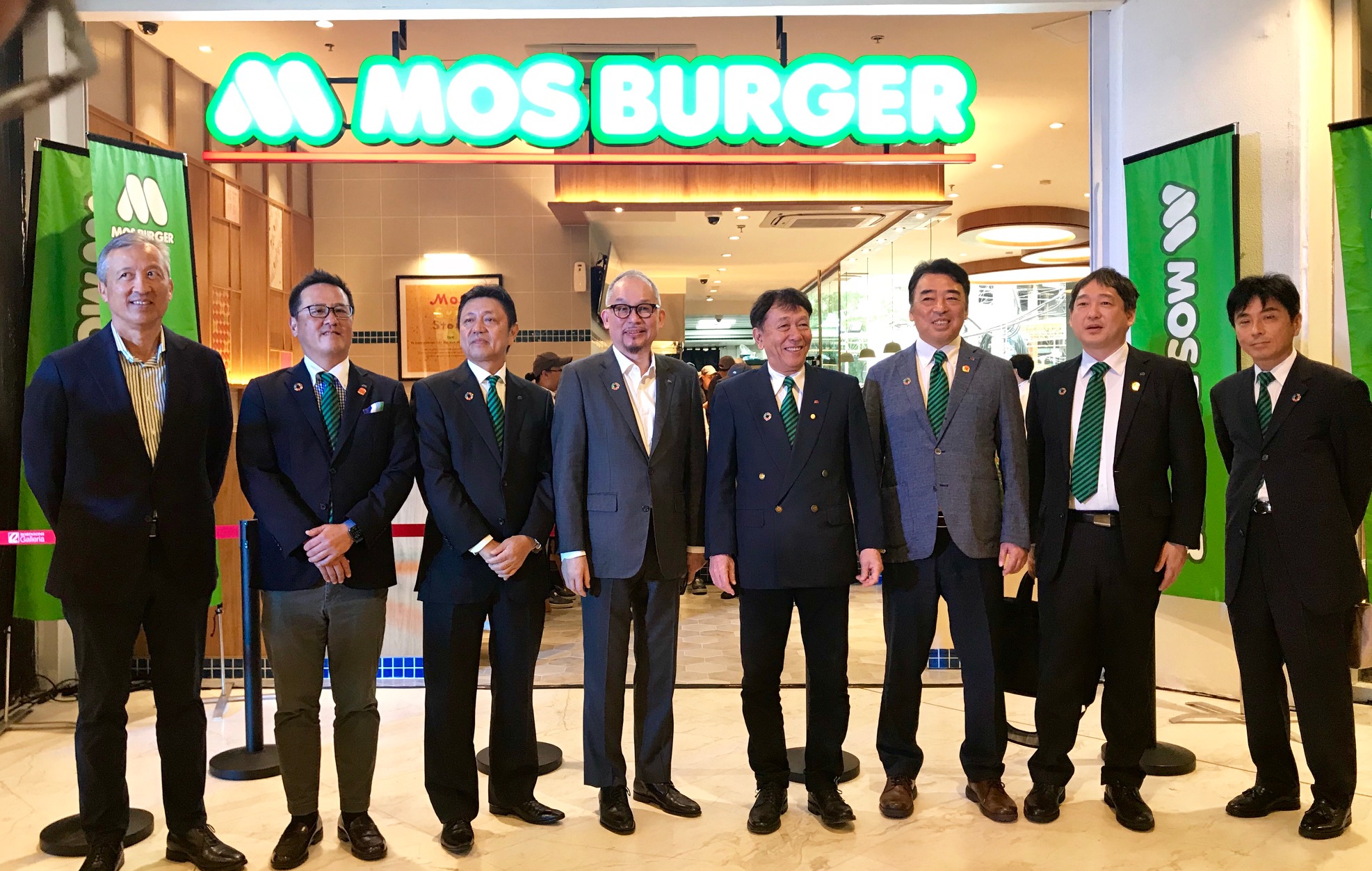 “They are all here because they are also invested in this business. We’re not just a franchise, we are a joint venture company,” disclosed Mr. Young. “I encourage more investments into our country which is good for our country. And I made them believe that we really have a growing country and this is something that they should really invest in,” he added.

“They’re so impressed with the way we handled this store, Mr. Sakurada was saying, ‘Hubert-san I feel like I’m in Japan. The staff, things operate like Japanese already’. Because we can, you have to believe in us, we have good talent,” Mr. Young related proudly.

The MOS Burger Philippines crew started their training sessions in October last year. A few went to Japan, while some went to Singapore. They have a morning routine of reading out loud the MOS Burger basic policy to affirm how they want the store to be (friendly, bright and clean), how the staff should be (cheerful, alert, energetic, and attending to the customers in a kind and gentle manner) and how they want their customers to feel (at ease and sensing the warmth that fill the store). You can see them hard at work through the glass panels of the open kitchen. “Because we want to show you that we serve you very clean products,” explained Mr. Young.

The executives from Tokyo together with the heads of the local team Araki Masahide, Tateishi Hiroshi, with Atty. Severino Sumulong and Mr. Young arrived in rally-inspired Toyota vehicles decked in MOS Burger decals. “Filipinos have long considered Toyota as part of their family, we are hoping that our fellow Filipinos will make MOS Burger a part of their family too,” said Mr. Young.

It is said that MOS Burger can be credited for the hamburger culture in the Land of the Rising Sun. Since it started in 1972, the brand has grown to around 1,300 branches in Japan plus more than 400 spread out in Singapore, Taiwan, Hong Kong, Thailand, Indonesia, China, Australia, South Korea, and now, the Philippines.

The letters M-O-S stand for mountain (dignified and noble), ocean (wide and vast), and sun (vibrant and life-giving). However, there’s also a story going around saying that the name MOS originated from the founder’s previous company, Merchandising Organizing System. I failed to get hold of Mr. Sakurada to verify this.

The goal is to have about 50 MOS Burger stores around the country by 2027. Scheduled to open soon are outlets in Robinsons Place Manila, Robinsons Magnolia, O Square Greenhills, SM Megamall, and One Eastwood Tower. 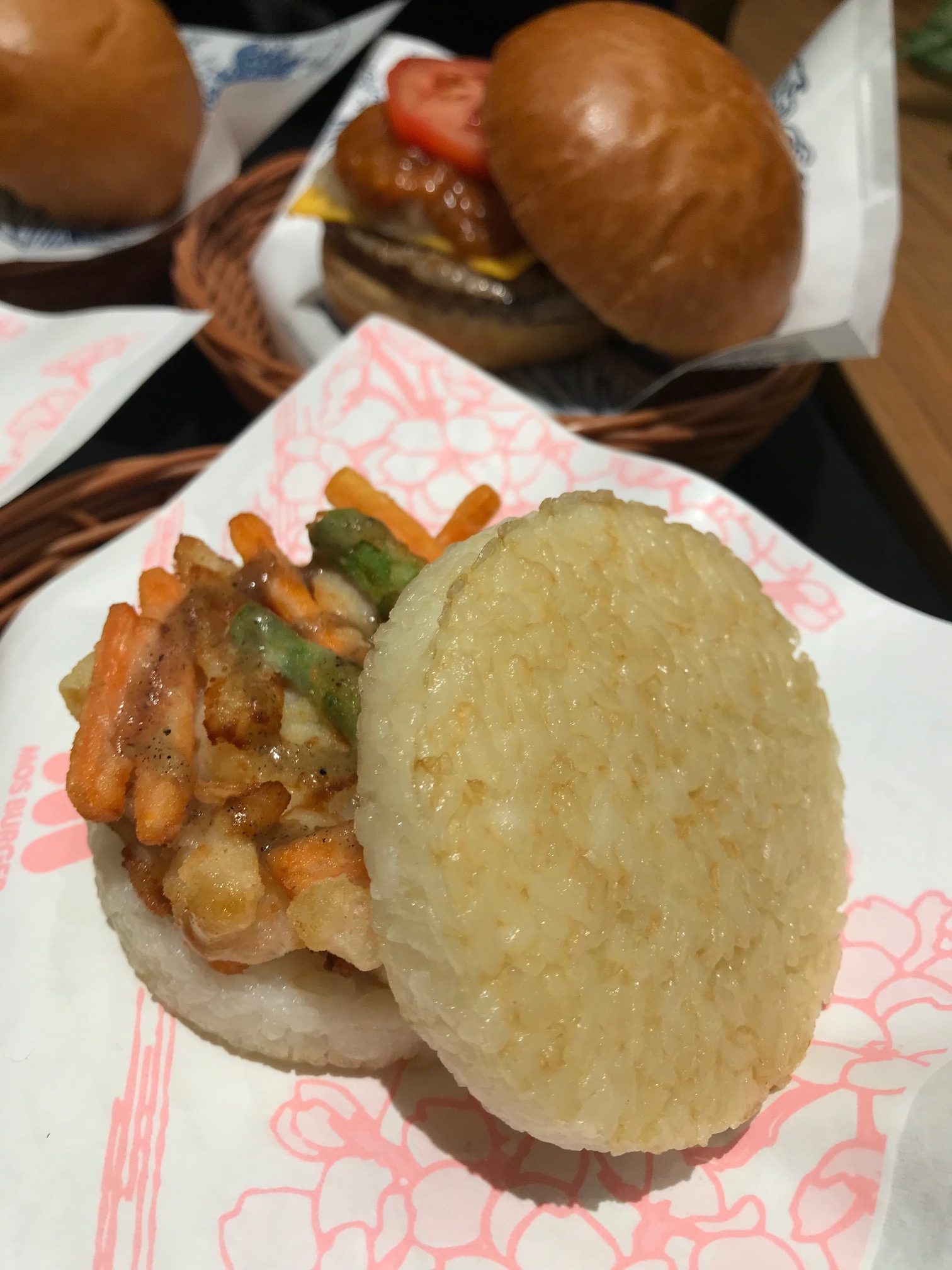 Mr. Young is also responsible for bringing UCC, CoCo Ichibanya, Mitsuyado Sei-men, and Yamato into the Philippines. “Probably I was Japanese before, I don’t know,” Mr. Young chuckled when asked about his affinity for Japanese brands. “But honestly, I love everything that’s Japanese. Just going to their convenience store, I’m like a child going to a toy store. I discover a lot of things, I’m intrigued about their packaging, the way they present their products. And despite thinking it’s just this much, it tastes very good. And that inspires me. The way I do things, I really do them the Japanese way,” he rationalized. Looking forward to his next project from Japan!